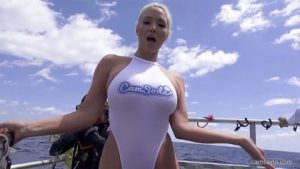 Cam girl Molly Cavalli makes a small dance on a boat before heading off to dive with sharks.

The adult film star Molly Cavalli was a victim of a shark attack, shooting ads for a sex cam site.

A sexy blonde set off for diving off the coast of Florida, where at least three lemon sharks and several other fish were swimming around the boat.

Dressed in a bright white swimsuit with a hood, pipe and fins, Cavalli sank into the water in a cage protected from sharks.

The crew had to stop prematurely to shoot, because she screamed in pain and was helped to get out of the water.

The shark left an unpleasant wound in Cavalli’s left leg, and as it was written on the YouTube page, the cam girl had to get 20 stitches, but she seems to be in a good mood.